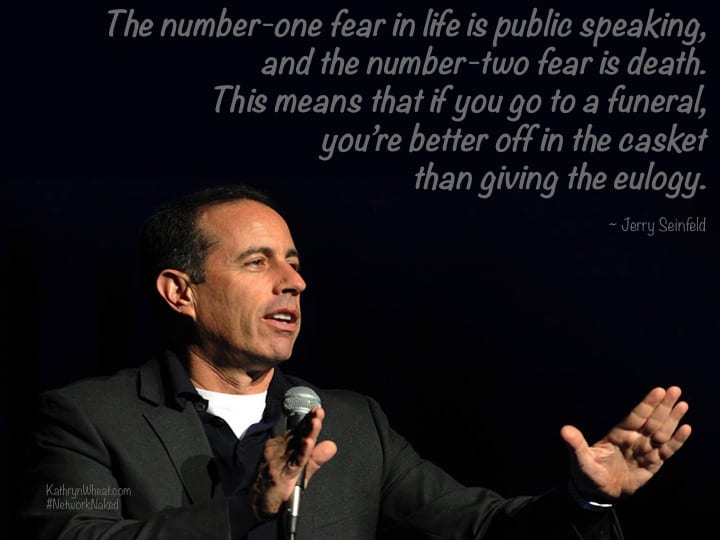 What makes you scared? For many people, the answer to that question is public speaking. It was for me for many years. The thought of standing up in front of a room and speaking was something that sent me running scared. I even hated standing up at networking events and saying my name and the name of my business. My stomach would be in knots until the ordeal was over with.

My entrance into public speaking was not something that I actually strived for. I was pushed. There was a monthly networking luncheon that I regularly attended and it was structured as such that each month a speaker was chosen to do a ten-minute spotlight. The host would draw a card out of a fishbowl to see who would be the next month’s speaker. Each time they did this, I would silently pray, “Please, please don’t pick me!” I had NO desire to get up in front of the group and speak.

My prayers worked for quite some time, but guess what? Yes, eventually my card was drawn. I could see my card being pulled out of the bowl and immediately started to panic and tell the person next to me to tell the host to choose someone else. Draw another card! I didn’t want to do it! But, to no avail, my networking neighbor said no. He told me that I could do it. I had a whole month to prepare and it was only ten minutes. He wisely told me that I should just simply tell my story.

I reluctantly agreed to do a ten-minute spotlight and I shared my story of being a woman in her late 40’s who, through life’s circumstances, had to reinvent herself and figure out how to make a living and support herself in spite of lack of experience, skill or knowledge. I told my story. It was authentic and simply me. Many people related to what I had to say.

Yes, I was nervous, to the point that I actually drank about half a glass of wine to calm my nerves. But it turned out okay! Nobody laughed at me or pointed fingers. People even came up to me and told me that my story inspired them and motivated them to not give in to frustrations. In fact, I started getting asked to speak at other networking events after that. I did it because I realized that each time, someone there needed to hear my message. Each time it got easier.

Now, a few years later, I’ve learned so much from speaking. I know that some people will like me and identify with my message and some won’t. Not everybody is meant to connect with me and that’s okay. I’m only there for the people that relate to me and need to hear my message.

None of us live our lives being un-judged by others. It happens every day no matter what you do. Whether you are in the spotlight or the one who silently walks into a room hoping to be unnoticed, people are judging you and it’s okay. Believe in your purpose and trust that you are here to share your best positive self with those that you meet.

When you approach public speaking from a service perspective, it makes it not about you. Thinking about all the good you will be doing for the people that need to hear your message takes all the pressure away. Speak up, share your message, have faith and trust that you are making a positive difference in someone’s life.